Bill Gates commented that Hans Rosling’s book Factfulness: Ten Reason We’re Wrong About the World – And Why Things are Better Than You Think “is one of the most important books I’ve ever read”. He describes this brilliant book as an “indispensable guide to thinking clearly about the world”.

Rosling, in his lectures, TV and radio appearances, admitted that he was quite rude about the term “developing countries”. At the World Economic Forum in Davos, where the great and the good gather each year to shape the global, regional and industry agendas, Rosling was very clear with his audience. He believed the term “developing countries” created a gap that divides countries into two groups, but doesn’t help us understand the world in a practical way. Nor does it help businesses find opportunities.

Fact-based insights to understand the world
Rosling described how humans have the urge to divide things into distinct groups with nothing but an empty gap in between. But doing so distorts the data fundamentally. In 2005 he set up the Gapminder Foundation with a mission to fight devastating ignorance with a fact-based worldview. In 2015, he wrote Factfulness with his son and daughter-in-law. However, crisis struck when he was diagnosed with incurable cancer. In 2017, a few days before he died, he wrote to his publisher, “Our joint work is finally being turned into an enjoyable text that will help a global audience to understand the world”.

As the UK moves towards Brexit, at Davies Hickman, we believe more fact-based insights and decisions are needed to drive our understanding and success in our new world. As organisations thrive to be more productive, we need to look towards thought leaders who can help us to understand the world in a practical way. But we need to be clear about which thought leaders we are going to respect and rely on. Who offers us clear thinking – a fact-based worldview that improves our vision? And what value do they offer?

Marketing and thought leaders’ credibility
In business and marketing, ‘thought leadership’ usually refers to a potentially winning strategy. According to Wikipedia, it is seen as a way of increasing or creating demand for a product or service. High-tech firms often publish analyses of the economic benefits of their products as a form of marketing.

Interestingly, a recent poll on Twitter by Tom Goodwin asked what job title or description makes someone immediately lose credibility when they use it in their LinkedIn or Twitter bio… Guess what came out top? 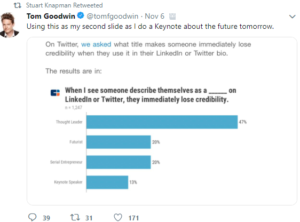 But it is wrong to let great thinkers such as Hans Rosling – a world-renowned thought leader – lose their immediate credibility based on a valid description of what he was. People need to understand, in a practical way, the difference between those great thought leaders who are a guide to thinking clearly about the world and others who describe themselves as thought leaders while spreading content that is unsubstantiated and/or has been tampered with to suit brand marketing and PR campaigns.

Media content that appears as reports, white papers, articles, infographics, videos, etc., which is neither fact-based nor involves statistical analysis, may be little more than PR-aped opinion leadership – and, if so, it rightly deserves to lose credibility.